Torino continued their impressive start to the season, as they beat a stubborn Juve Stabia side 1-0 to record their fifth consecutive victory and remain top of the Serie B table.

There was a sombre atmosphere at the Stadio Olimpico on Saturday afternoon as a minutes silence was held to commemorate the lives of Lorenzo Ghedi and Fabio Massimo Pozzo who tragically died after they were involved in a collision with the Torino team coach on Sunday night.

Torino fans also paid tribute to their former player Gigi Meroni, as the 15th October is the anniversary of his death. The enigmatic winger died in a road accident 44 years ago, and the man affectionately referred to as the 'La Farfalla Granata' (The Granata Butterfly) was commonly acknowledged to be one of the best players of his generation before his premature death, aged just 24. 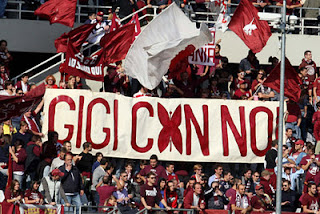 Torino made a number of changes to the side that beat Hellas Verona last weekend, with Alen Stevanovic, Giulio Ebagua and Angelo Ogbonna all coming in to the starting eleven.

The first real chance of the match came after fifteen minutes, after nice interplay between Rolando Bianchi and Giulio Ebagua put Mirco Antenucci through on goal, but his shot was well blocked by the covering defender.

In the opening seconds of the second half, the visitors almost took a surprise lead after a mistake from Kamil Glik gave substitute Jerry Mbakogu a chance to score, but his lob went well over the bar.

Captain Rolando Bianchi almost opened the scoring for Toro, but his fierce shot from 20 yards went over the bar. Moments later, Alessandro Parisi almost came close to scoring his first goal in a Torino shirt when his free kick from 40 yards out was deflected, but Andrea Seculin in the Juve Stabia goal made a good save to deny him.

Torino came close to scoring once again, this time it was Alen Stevanovic who did well to get to the byline and cut the ball back to substitute Alessandro Sgrigna, but unfortunately for Toro, Sgrigna lent back at the vital moment, and the ball ballooned over the bar.

With ten minutes remaining, Torino finally got the breakthrough that their play deserved when the Poland International Kamil Glik delivered an inch perfect assist to find Rolando Bianchi, who peeled away from his marker to head into the corner of the net.

Despite one nervy moment when a Ferdinando Coppola clearance rebounded off a Juve Stabia player to go narrowly wide, Torino held on for their eighth victory of the season - and thanks to Padova losing to Varese on Friday night, Toro are now six points clear at the top of the league.