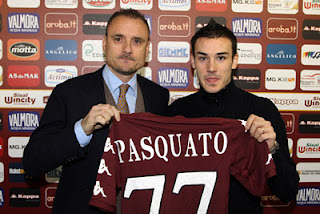 Torino have made their third signing of the January transfer window by completing the signing of winger Cristian Pasquato on loan from Juventus.

This move is certainly a controversial one with many Torino fans unhappy that the club has had to resort to borrowing a player from local rivals Juventus. Earlier this season, Pasquato was on loan to Serie A side Lecce but that move was cut short after he failed to maintain a regular place in the side.

In the 2010/11 season whilst on loan at Modena, Pasquato scored nine goals including a number of spectacular free kicks, and his arrival may enable Toro to be more productive with their set pieces. Whilst it is obviously not ideal that Toro have had to loan a player from Juventus, if he helps Toro to gain promotion then the end will justify the means.

It will certainly be interesting to see what Pasquato says about the move in today's press conference, as although he will be looking to endear himself to the Torino fans, he will also be aware that he will almost certainly be back at Juventus in the summer.