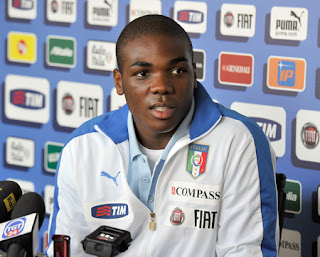 After being name in the starting eleven, Torino defender Angelo Ogbonna looks set to make his full debut for Italy in Wednesday's friendly against the USA. After initially being called up to the Italy squad as a late replacement in June 2011, the talented defender has improved markedly since that call up. Here is a look at how Ogbonna's consistent performances in Serie B means that he is on the verge of being a part of Cesare Prandelli's squad for Euro 2012.

In the article that I wrote regarding Ogbonna's first call up in June, I referred to the fact that despite having obvious potential, he still had a few weaknesses in his game - primarily that his desire to play the ball out from the back could often lead to losing possession, and on occasion, picking up needless yellow cards.

However, this season I would genuinely find it difficult to criticise any part of Ogbonna's game, as he has been one of the main reasons that Torino are on track for a return to Serie A. Whilst I appreciate the fact he is playing at a lower level and against lesser quality forwards, his improvement in less than one season has been very noticeable and makes me believe he will continue to improve regardless of the opposition.

Luckily the statistics also support the view that this season has been by far Angelo's best in a Torino shirt, and it is not just my Granata-tinted glasses. At this stage of the 2010/11 season, Ogbonna had received six yellow cards - so far this campaign, he has received just one. Whilst this season's Torino team is much better than its predecessor and has had far less defending to do, this stat also suggests that he is timing his challenges much better.

As I aluded to previously, Torino have enjoyed a good season so far, and one of the reasons for that has been the defence. Ogbonna has been a part of the joint best defence in Serie B that has conceded just eighteen goals in 28 matches. Whilst Valerio Di Cesare and Kamil Glik have both impressed when called upon in central defence this season, it is Ogbonna who has shined. Thus highlighting that the added responsibility of being given the captain's armband in the absence of the out of form Rolando Bianchi doesn't seem to have had any detrimental effects.

Despite plying his trade in Serie B, Cesare Prandelli has noticed Ogbonna's talent, and if he continues to improve as quickly as he has done in the past nine months, he will probably earn himself to move to a team playing in the Champions League - despite recently signing a new contract.

If he is included in the Italy squad for Euro 2012, he could miss Torino's run in as the Serie B regular season does not finish until May 27th. However, lets hope that won't be a problem, and by the time Cesare Prandelli names his final 23 man squad, Angelo will have already done his part in helping Torino regain promotion to Serie A.
Posted by Torino Blogger at 20:09