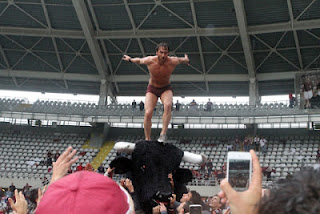 Torino will be playing Serie A football for the first time in three seasons after their 2-0 victory over Modena on Sunday afternoon secured promotion.

In front of a sold out Stadio Olimpico, Toro made a bright start knowing that it was essential to get an early goal to ensure that the fans did not get nervous. Mirco Antenucci's had a great chance to add to his tally of ten goals, but Modena keeper Nicholas Caglioni did well to deny him.

Riccardo Meggiorini, Nnamdi Oduamadi and Juan Surraco all came close to scoring within the opening twenty minutes, but a combination of good goalkeeping and poor finishing meant that it remained scoreless. However, midway through the first half, Torino did get the goal that their domination deserved as Meggiorini's shot rebounded into the path of Oduamadi who scored at the second attempt.

At the other end, a quick counter attack gave Modena their first chance of the match, but Matteo Ardemagni's shot was well saved by Francesco Benussi.

In the second half, Mirco Antenucci should have put the result beyond doubt, but he was only able to divert Juan Surraco's cross over the bar.  Danilo D'Ambrosio also had a great chance to score for the second game in a row, but his header was saved by Caglioni.

However, with seven minutes remaining, Torino finally confirmed that they would be playing Serie A football next season, as Giuseppe Vives' clever cut back was side footed in by an unlikely source - substitute Giuseppe De Feudis.

That goal sparked wild celebrations in the stadium, and although Pescara's victory against Sampdoria sealed their promotion as well, Torino will be confirmed as Serie B champions next weekend if they beat Albinoleffe next Sunday.

Instead of playing against the likes of Crotone, Cittadella and Gubbio like they did this season - next season, Torino will now be facing Milan, Inter and Juventus - with the derby being the fixture most Toro fans are  looking forward to the most.