Angelo Ogbonna - should The Granata be worried? 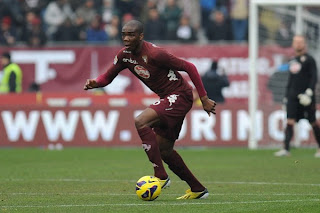 It is widely expected that this will be Angelo Ogbonna's last season in a Torino shirt, with the Italian international seemingly destined for a move to a Champions League team in the summer.

However, after recently recovering from an injury that kept him out of action for over three months, Ogbonna has been less than convincing in his last two appearances for the Granata. Firstly, in his comeback match against Atalanta three weeks ago, he was partly at fault for the Nerazzurri being awarded a penalty after he was caught out of position, which then allowed Marko Livaja to nip in and win a spot kick for his team.

A week later against Cagliari, the highly rated defender had an even worse afternoon when he conceded two penalties himself - the second of which resulted in him being sent off for the first time in his career. Despite one of the penalties being extremely debatable, it is still a worry that Ogbonna has made three costly mistakes in successive games - especially given his imperious form in the previous two campaigns.

So, what could explain this sudden dip in form?

After his performance to forget against Cagliari, there was some speculation on Twitter that there may be a correlation between this performance, and the fact that he had recently been linked to a £17m move to Arsenal. However, considering the fact that Ogbonna has been linked with a number of top European clubs in recent seasons, I find it difficult to believe that transfer speculation would begin to get to the player, especially considering the fact he is now much older, and hopefully much wiser. Furthermore, without wishing to be too disrespectful towards The Gunners, considering the fact Angelo has stated that his main ambition is 'to play in a Champions League final' a move to a team who may not even qualify for the competition next season may not have even been the most appealing proposition.

Another explanation for Ogbonna's recent poor performances could be his lack of experience in Serie A, and despite excelling in Serie B for Torino in the past two seasons, he is still yet to play fifty matches in the top tier of Italian football. However, the Cassino born player has impressed many pundits in his five appearances for the Italian national team, and he has certainly not looked out of his depth when up against higher quality opposition. However, it could also be argued, that on form alone this season, Ogbonna's understudy - the Uruguayan Guillermo Rodriguez has actually been the more impressive performer, and he has been a big reason for Toro's impressive defensive record. Whilst this is certainly true, I am almost certain that despite his recent mistakes, the majority of Granata fans would probably still prefer Angelo Ogbonna to partner Kamil Glik in central defence for the match against Parma on Sunday.

Therefore, we are left with one explanation for his dip in form, and it is a simple one as well - a lack of match practice. Fortunately, Angelo has rarely been injured at all for the past three seasons - and therefore a three month absence was bound to have a negative effect on the player, and it would have been naive to think otherwise. Hopefully, after having to sit out yet another match due to being suspended, it has given Torino's vice captain an opportunity to improve his match fitness.

So if Ogbonna is selected by Giampiero Ventura against Parma on Sunday,  he will hopefully give a performance that will show why so many of Europe's top clubs have been chasing him - and it may even add a few million euros to his price tag, if as expected, he departs Turin this summer.