Maratona and Elsewhere #7 : Gasperini and the “torti arbitrali” 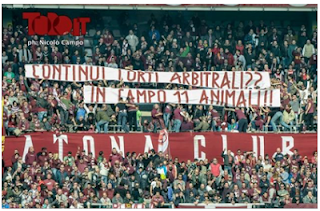 It can be a demoralising experience, supporting a football club. You stand on the terraces, sing and shout and swear and applaud, but it doesn’t always end well. Sometimes one wonders if investing so much time, money, and emotional energy is healthy. Poor performances. Millionaire players not deserving of the shirt, in economically difficult times. This can leave an unpleasant taste in the mouth.

But what if the coach has made all the correct choices and the players have done their best, only to be undone by incompetent and/or corrupt officiating? Sir Alex Ferguson is quoted to have said “It’s hard to keep your faith in the game” last Tuesday following Nani’s debatable red card during Manchester United’s Champions League defeat by Real Madrid. Even 60% of the readers of “Marca”– by common consent Real’s in-house newspaper – thought the sending-off was incorrect!

Speaking of Real Madrid, they (and Manchester City) will recognise the name of the official who was in charge of Toro v Palermo: Gianluca Rocchi. He gave City a penalty and sent off Alvaro Arbeloa during their Champions League group match in Manchester last November.

When I heard pre-match that Rocchi was going to be our referee, my comment was not one suitable for publication. Combining this unwelcome revelation with the fact that no team in Serie A – or, for that matter, the English Premiership, Ligue 1, La Liga or Bundesliga – has had more penalties awarded against it this season than Toro gave me a sense of foreboding. Add to this the comedy performance of Rocchi’s colleague Sebastiano Peruzzo the previous week when refereeing Cagliari v Toro (two penalties and two red cards against; one penalty for but two other more obvious shouts not given) and I was feeling decidedly nervous. I needn’t have been.

It seemed to at least one observer that somebody had taken Signor Rocchi to one side and told him that it wouldn’t look good for Lega Serie A if Toro had (yet) another controversial game. It also seemed that the players had been given the same message. This game had 0-0 written through it like a stick of Blackpool rock.

And if (big if; humour me for a moment) the officials and the players had been spoken to, who else might have known? Gigi Buffon’s gambling friends? The Mafia? Oriental betting syndicates? Let’s go all conspiracy theory and say 'some or all of the above' and throw in UEFA (Michel Platini, let us not forget, is a gobbo). Lovely, transparent, cuddly UEFA. Sponsored by lovely, transparent, cuddly Gazprom; amongst other equally lovely, transparent, cuddly organisations whose products I boycott. Gazprom whose wholly-owned subsidiary Zenit St. Petersburg play in the Gazprom-sponsored Champions League! I expect some interesting refereeing decisions during Zenit’s surge next season to a semi-final clash with either Giuventus (see Platini above) or PSG (employer of Platini’s brother). In fact, I wouldn’t be surprised if this year’s final is Giuventus v PSG.

Palermo, meanwhile, strike me as a sort of decaffeinated (de-E.P.O.’d?) version of the gobbi: pink shirts, large gobbi fan base (much immigration south-to-north to work in FIAT’s factories); there’s even a gobbi shop in Palermo somewhere. I expect their tifosi to renew their allegiances with our striped so-called cousins with relegation looming, their best players being sold (Pastore and Sirigu to – well, well! Look who’s here! – PSG), and a president who is somewhat trigger happy.

But before I continue, an anecdote.

About 18 months ago I was working for a language school in Corso Unione Sovietica – Soviet Union Street! They don’t call Turin “the new Stalingrad” for nothing! The school shall remain nameless as the bastards still owe me money and don’t deserve any publicity. Nevertheless, one afternoon I was introduced to a diminutive, grey-haired gentleman, who, it appeared, had just finished an English lesson: his name was Gian Piero Gasperini, then ex-Genoa manager and soon-to-be Inter manager for five whole games. He in turn was replaced by Chelsea’s current flavour-of-the-interim, Rafael Benìtez.

Gasperini recently replaced Alberto Malesani who had replaced him as Palermo coach only 19 days previously. Palermo president Maurizio Zamperini has a great deal of previous in hiring and firing, and he could no doubt give Roman Abramovich a few pointers in this regard. The legendary James (@ACJimbo) Richardson in his Guardian European football papers review quoted from “Gazzetta dello Sport” that Zamperini has gone through 43 coaches in 26 years. I’ll take Jimbo’s word for it, as I don’t read the Gazzetta; it seems to be turning into another “Tuttosport”, which itself is only fit for the bottom of a birdcage.

Gasperini isn’t flavour-of-the-anything with the Granata family. Here’s a little clue (from Wikipedia):

“Gasperini entered the Juventus youth system at the age of 9. In 1994 he returned, this time as a coach. He was initially coach of the Giovanissimi (U-14) for two years, followed by two other years with the Allievi (U-17). In 1998 he became head coach of the Primavera (U-20) squad.”

Yes, Palermo even have a gobbo manager!

[I don’t wish to appear fixated upon Venaria Town, but there is evidence of their existence (though not their actual supporters, who remain invisible whenever possible) all over this city, and so perhaps one adopts a bunker mentality when discussing an invisible enemy with superior resources and the occasional Jeep.]

So, to the game itself. Hazy sunshine, pleasant company. I had been hoping for a cold day, to disadvantage our Sicilian opponents, but it was not to be. I’m not a fan of 12.30 kick-offs as they disrupt the rhythm of an Italian Sunday, but I was mellowing after a couple of beers on a largely empty stomach. Then the game started…

Clearly, I had not had access to the script. Our friend Rocchi appeared to be refereeing a different game to the one I’d paid to see. I thought we had a couple of decent appeals for penalties, but that wasn’t going to happen after the previous week as previously discussed. There is a bizarre kind of temporary blindness common to Serie A officials, normally lasting only 45 minutes or so (but can recur after half-time), which seems to affect the 5th official on the goal-line especially. In fact, I have only ever seen the 5th official do anything at all on one occasion – and that was to erroneously award Roma a penalty against us last November. [See previous complaints regarding the quality of officiating in Toro games. Mind you, it was shit in Serie B last season, too.]

Many (ahem) interesting decisions from Signor Rocchi; some simply bizarre. On 35 minutes, Alessio Cerci raised his arms to protect himself from an incoming flying boot to the face and was booked, presumably for handball, thereby incurring a suspension. On 45, Cerci was fouled and stayed down. Rocchi waved play on. Within seconds, Kamil Glik had gone through the back of a Palermo player (a challenge worthy of a yellow card), but Rocchi realised he’d fucked up with the Cerci challenge and so waved play on again for another 5 seconds until Matteo Darmian was fouled and Rocchi remembered what his whistle was designed for. Unsurprisingly, the Maratona wasn’t overly impressed with this performance and in unison called him “figlio di puttana”, which might be a tad unfair on his mother. Or might not. Never met the woman.

Just to show that we don’t show any favouritism, Gasperini was also serenaded with the evergreen classic “Sei solo gobbo di merda!”. We were indeed in generous mood! There was a “Cairo, vattene!” for our beloved President, the new television magnate, and a “Palermitani! Gobbi di merda!” for our visitors. I tried my best to insert the word “decaffeinati” in there, but to no avail.

After 55 minutes, I noted that I couldn’t recall seeing a shot on goal. This made me think of something I wrote in a previous “M&E” regarding goalkeepers freezing parts off when they have nothing to do on a cold day. No chance of that happening on this occasion. Dying of boredom, perhaps, but not of cold.

I stopped writing on 77 minutes. There seemed little point. A lot of muttering and shaking of the head as we left the stadium. A certain amount of shrugging and “This is Italy”-ing, which is a common reaction to being shafted by the powers-that-be in this country. But possibly none of that applies to this match and Rocchi is simply incompetent and the players not much better?

Enough. If you’ve read this far, many thanks.

Here’s hoping for a genuine, fair, and fairly-officiated game of football when Lazio come to play next Sunday - famous last words!