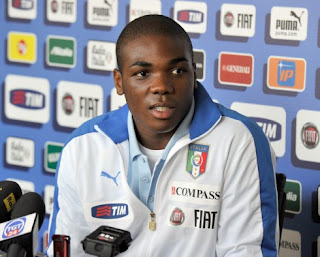 As Torino fans we knew that this day would be inevitable, and that Ogbonna would one day move on to a club with more potential of winning trophies, but unfortunately that club has turned out to be Juventus. The Italian international is probably already regretting a comment he made in a 2011 radio interview when he proclaimed he would 'never' sign for Juve, and I doubt that will endear him to fans of his new club.

Whilst I am extremely disappointed that Ogbonna has joined the likes of Gianluca Pessotto and Federico Balzaretti in leaving Toro to sign for Juventus, that blow is somewhat softened by the fact the Granata have received an extremely fair transfer fee for the player - especially considering the fact he had a disappointing campaign whilst in a Torino shirt last season.

That being said, and has much as I hate to admit it, I do believe Angelo will be a success for the bianconeri, and he certainly does have the attributes to improve the Juventus squad, and still has a lot of potential to improve further.

The €13m (that could rise to €15m) that Torino have received will go a long way to improving the squad for next season, and one hopes that President Urbano Cairo does decide to spend this money, and continue the club's promising transfer policy of this summer.

It will also be interesting to see what sort of reaction Ogbonna gets when he returns to the Stadio Olimpico wearing a Juventus shirt. Because whilst unlike the aforementioned Balzaretti, he was not born in Turin, or raised a Torino fan - one probably does expect a little bit more loyalty from a player who has been with the club since he was fourteen years old.