Maratona & Elsewhere #13 : Toro v Sassuolo: “The one in which we’re very rude about Enzo Maresca’s mother” 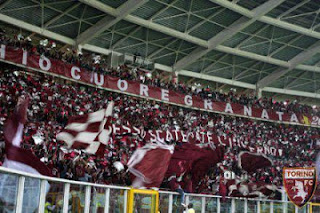 Last week against Pescara didn’t really feel like the real thing, to be honest. More a holiday atmosphere than anything else. The Piemontese equivalent of a “Kiss Me Quick” hat and a stick of rock wouldn’t have been out of place. Much catching up with friends not seen since May, comparing suntans (not me, obviously, being a Barbarian), it felt like an aperitivo, as if we were all just dropping in to say “ciao” en route to another engagement.

But this was the real thing.

In M&E#12 I touched upon the possibility of Enzo Maresca joining the club and the reaction said possibility provoked. Some behavioural psychologists speak of the concept of reinforcement, whereby certain behaviours can be strengthened or increased via reward or punishment. I vaguely recall studying this in Manchester in the late ‘80s in moments of relative sobriety.

We entered the stadium as normal, bought beers as normal. Then the singing started:

I would like to think that the many thousand fully-qualified Granata behavioural psychologists present were merely indulging in some form or another of reinforcement therapy for the benefit of Cairo, Ventura and Petrachi, something along the lines of “don’t you fucking dare try anything like that again.”

[The aforementioned songs and their many variations feature regularly in the Maratona songbook, along with many other popular favourites. In the coming weeks and months I shall endeavour to devise a drinking game called “Maratona Binge-O!”, the purpose of which will be to consume a certain quantity of a particular beverage upon hearing a given song or chant from the Curva. As there are obvious dangers and practical difficulties inherent in attempting a drinking game inside the stadium, this will be a TV-based game for armchair Ultras everywhere, season ticket holders who are unable or unwilling to attend away games, and for anyone who for whatever reason needs a drink when watching Toro. I know how you feel.]

The recently-but-not-dearly departed Angelo Ogbonna also received a “gobbo di merda!” for good measure. It would have been rude to leave him out, after all, and - as my late grandmother used to say -honey catches more flies than vinegar (which puts honey in second place, behind bullshit). I wish him well and hope he enjoys his next few months on the bench at Venaria Town before going to Sampdoria on loan in January in order to get a game before the World Cup comes around.

And so to the announcement of the teams. No prizes for guessing whose names were greeted with the least enthusiasm: Vives and the Meggiorini.

The Ultras still seem to be in pre-season. Perhaps the guys who can find their own arse with both hands are still at the beach? Any way you slice it, the banners (which were made from somebody’s mother’s floral wallpaper and single-sided, so those standing behind couldn’t read them) and general orchestration left something to be desired. The rendition of “Forza! Vecchio! Cuore! Granata!” was the weakest I have heard since my debut against Modena in November 2010.

I will also retain the right to get a little bit pissed off whenever they become so self-absorbed that the game (and others’ enjoyment thereof) takes second place to their collective ego. The €230 I paid for my season ticket was to watch the team play, thankyouverymuchrantover.

Continuing in contrary mood, many people in the Maratona – those in my immediate vicinity and myself included - disagreed with Rob and Peter and with 52% of ToroNews voters in their selection of Vives as Man of the Match. In the Maratona we don’t have the benefit of commentary, action replays and multiple camera angles, but we do have the advantage of being there.

My received wisdom (Maratona level 2, section 213) was that Cerci had a good game and was M.o.M., despite playing out of position for much of the game as a second striker. No surprise that his goal – an almost carbon copy of the beauty he scored at Fiorentina last season – came from the right wing. Honourable mentions also for Matteo Brighi for his goal and all-round first half performance (I hope his injury - an adductor strain, I believe - is a temporary inconvenience), for Migjen Basha who came on in his stead second half, El Pelado Rodriguez and Padelli in goal (who made only nine tackles fewer than Vives, according to legaseriea.it!).

As an aside, four days later 67% of ToroNews readers who responded said they would replace Vives with Bellomo for the Atalanta game! Shall we add “fickle” to “superstitious”, and/or get bogged down with statistics instead? Nah. Let’s not.

I think Ciro Immobile can be happy enough with his performance, if not with the cretinous short corner routine on 80 minutes that led to him receiving a yellow card on the halfway line for what could be considered a professional foul. We had three guys waiting at the far post, for fuck’s sake. The exact same kind of moronic set-piece – I’m assuming we don’t practice set-pieces in training – that all too often last season led to the ball arriving in our penalty area for Gillet to deal with.

I also have to disagree with ToroNews regarding Orsato, the referee. He seemed keen to wave play on when there was no discernible advantage to be had, and there was one comedy moment where he ran 30 metres to bark at Ventura, having just given us a free kick. Ah well, it could have been worse, I suppose; we could have had Bergonzi (who refereed the most recent derby after his short break in Dubai with Beppe Marotta, and the pleasure of whose company we’ll have again in Bergamo next Sunday), or Rocchi, Tagliavento, Peruzzo, Banti or any of the other clowns. Orsato getting a favourable review for being merely average shows you the standard of officiating we have in Italy.

So, for Pescara 3-0 in 2012, read Sassuolo 2-0 in 2013. We saluted our first win and first Fisherman’s Friends of the season with “Tutta la notte, coca e mignotte!”(“All night, cocaine and whores!”) and invited the players to join us under the Curva, which they duly did – cf. the Pescara game.

And what of the new-fangled 3-5-2 formation? I’m not a fan, on the evidence of this match. Kamil Glik doesn’t look comfy on the right of a back three, Darmian and D’Ambrosio aren’t wingers, and Cerci doesn’t play with his back to goal. I’m hoping for a counter-attacking 4-4-2 and Farnerud playing left right out for the Atalanta game, which is yet another 2045 kick-off on a Sunday night. Don’t Lega Serie A realise that some people have to get up for work on a Monday morning?! It’s not exactly conducive to attracting away fans to add to the atmosphere and/or televisual spectacle, either.

FORZA! to our travelling tifosi.

P.S.: Whisper it - fourth place in the classifica! Officially we’re 4th, because (get this) in the event of two or more teams having identical records the tie is broken according to last season’s final league position (shakes head). We’d be 4th alphabetically, too, BUT WE’RE FOUR PLACES ABOVE THE GOBBI.

P.P.S.: Final word on superstitions. Mine is wearing a silver earring in the shape of the Warner Brothers Tasmanian devil –yes, I know I should know better at my age, but I didn’t wear it against Pescara while I did against Sassuolo. And which game did we win? ;-)

Steve is a season ticket holder who moved to Torino in 2009 after meeting a Torinese lady called Raffaella on Facebook - you can follow Steve on Twitter here.