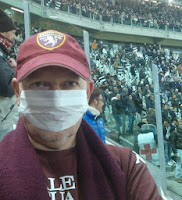 As John Lydon said to the audience as he closed the final Sid Vicious-era Sex Pistols concert at San Francisco's Winterland in January 1978: "Ever get the feeling you've been cheated?"

Ignore songs about Berlusconi going to prison. Ignore fighting in the Maratona. Ignore excellent goals from Danilo D’Ambrosio and Alessio Cerci. Ignore being 2-0 up against the mighty Milan with 87 minutes on the clock and deservedly so. Ignore Milan’s first goal, for which there was some doubt about offside. Ignore Milan’s Nigel De Jong splitting Marcelo Larrondo’s lip with his elbow, and Mario Balotelli aiming first a kick and then a slap at our goalkeeper Daniele Padelli – well, the officials did, so why can’t we? Are we sitting comfortably? Then I’ll begin.

We’re playing added time at the end of the game. Toro are winning 2-1. Marcelo Larrondo is sitting on the turf with an injury which turns out to be a broken 5th metatarsal which requires surgery. He is shouting to all and sundry that he has a broken foot and requires medical attention. Milan’s goalkeeper Christian Abbiati engages in conversation with Larrondo, but chooses for whatever reason not to alert the referee or the medical staff. No Good Samaritan, he. The Torino bench have asked for play to be interrupted to allow treatment to and substitution of the injured player. The 32-year-old referee Davide Massa - a banker (sic) by profession - allows play to continue. Why, exactly? Because he thinks that Larrondo is pretending that he has a broken foot? Because he doesn’t know what he is doing, as evidenced by his subsequent 3-match suspension from refereeing in Serie A? Because he has been told that Milan aren’t allowed to lose?

The ball remains in play and in Milan’s possession. That is, until the ball goes out for a Milan throw.
At this point, regardless of the referee’s competence or lack of, one of the unwritten rules between professional football players is that the team in possession of the ball stops play to allow their injured opponent / fellow professional to receive medical attention.

Instead of allowing fair play to rear its ugly head, Milan allenatore Massimiliano Allegri – who had the sheer chutzpah to say in a post-match interview that we were “a little unfortunate” not to win – orders Philippe Mexès to take the throw-in before we can substitute Larrondo, and the resultant play leads to Giovanni Pasquale upending Andrea Poli for the penalty that gives Milan an undeserved draw with the last kick of the game.

Compare and contrast this scenario with an excerpt from Massimo Fini’s excellent article, “La slealta del Milan è un riflesso del mondo morale di Berlusconi” (“Milan’s unfairness is a reflection of Berlusconi’s moral world”), which can be found in its entirety without my inexact translation at massimofini.it:

It’s January 21st, 1990. Atalanta versus Milan in the quarter-finals of the Coppa Italia. Milan are losing 1-0 in the 88th minute. Their attacker Stefano Borgonovo is laying - apparently injured - in Atalanta’s penalty area. Atalanta’s Glenn Strömberg puts the ball out of play to allow Milan to treat their injured player. However, the sporting Frank Rijkaard (he of spitting-in-Rudi-Völler’s-hair fame, lest we forget), instead of returning possession, throws the ball to his team-mate Daniele Massaro, who crosses the ball back into the penalty area, where the now miraculously healthy Borgonovo hits the deck and the referee points to the spot. Arrigo Sacchi orders Franco Baresi to not do the decent thing – to miss the unjust penalty - and Milan draw the game and progress to the semis.

Fini’s article goes on to criticise the cynical “money-and-power-are-everything” nature of Silvio Berlusconi and how the club he bought in 1986 manifests his personality on the field of play. An inability to lose with dignity. I would add that said infantile world view (Exhibit 94:  his current threats to withdraw his PDL party from the coalition and bring down the government should he be sent to prison by those nasty “communist” judges), vast wealth and – shall we say – some interesting connections allow for petulance and intimidation both on and off the pitch... well, the Maratona didn’t sing “voi siete come la Juve!” just for the sake of something to do on a Saturday evening.

I have seen the broadcaster Mediaset – like AC Milan, a subsidiary of Berlusconi’s Fininvest - rechristened “Mafiaset” on at least one occasion, possibly due to his membership of the P2 Masonic Lodge and his historic connections to the fragrant (or should that be flagrant) Bettino Craxi, who allowed him to create his national commercial television network when RAI was the only national broadcaster permitted by law. Even his hair is dubious. And as for the tax evasion and underage girls... But, again, this is not supposed to be a political blog, so if this sort of thing is grist to your personal mill please feel free to investigate elsewhere.
So, the general consensus of opinion is that we were shafted on the pitch: only internet trolls such as menomalexsilvio on The Guardian website have suggested otherwise, to my knowledge. Off the pitch? I need to retain some bile for the derby, so I’ll merely provide a list:

• Torino FC was fined €4000 for a flare being thrown on the pitch, which didn’t happen. A flare was thrown from the Maratona in the second half, but it landed about five metres behind the goal we were defending.
• Kamil Glik was fined €1500 as captain of the “offending” team.
• Sporting Director Gianluca Petrachi was fined €3000 for being overheard in the dressing room after the game - by an employee of the Procura Federale – criticising the officials and using a blasphemous expression.
• General Secretary Pantaleo Longo was temporarily suspended from the Italian football federation for insulting the fourth official for not allowing us to substitute Larrondo.
• Milan’s Philippe Mexès slapped our Head of Ticketing, Fabio Bernardi, and was photographed so doing by Nicolò Campo (see Toro.it). No sanction, to my knowledge.

After the final whistle, the Maratona chanted “Venite sotto la Curva!”, but most of our players had left the pitch by that point, clearly angry and sickened. Il Capitano Glik and a few others applauded in thanks and acknowledgement, but were obviously – like us – not really in any mood to be consoled. I myself took a detour for a numbing drink and got home at two in the morning, still shaking my head. But it wasn’t exactly a mood of disbelief; we’ve been here many times before. As Toro fans we’ve had (too) much experience of the rough end of the footballing pineapple. These injustices permeate the collective memory and one becomes able almost to predict what will happen next, with a turn of the stomach and a tiny voice saying “here we go again”.

Lessons to be learned? Kakà and Robinho left much to be desired. That’ll teach them to be in my fantasy team. Will use the same technique for the derby. ;-)

Steve is a season ticket holder who moved to Torino in 2009 after meeting a Torinese lady called Raffaella on Facebook - you can follow Steve on Twitter here.