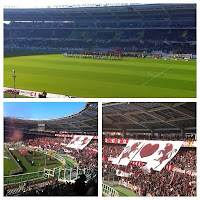 It was a celebratory atmosphere before kick off at the Stadio Olimpico in Turin at Sunday lunchtime, but whilst the action on the field promised much at times, it failed to deliver any goals.

The supporters of Fiorentina and Torino are 'twinned', an alliance formed due to the shared hatred of a common enemy - Juventus. Therefore, the atmosphere was a friendly one, with the announcement of the Fiorentina team being greeted with applause and not derision as is so often the case.

After the defeat against Parma last Monday, Toro were forced into two changes as Alessandro Gazzi replaced the suspended Giuseppe Vives, whilst Paulo Barreto was in for the injured Ciro Immobile. Without both Giuseppe Rossi and Mario Gomez, the Viola were forced into using Josip Iličić in an unfamiliar striking role, with Juan Cuadrado and Joaquin either side of him.

Daniele Padelli was forced into action for the home side from Mati Fernandez's free kick, but the much maligned goalkeeper did well to parry it to safety. Fiorentina were having the better of the first half, and both Facundo Roncaglia and Borja Valero had half chances to give them the lead.

On the stroke of half time Alessio Cerci broke away from the Viola defence, but his low shot was tipped round the post by the Brazilian Neto. Despite the scoreline, both sides were continuing to create chances, and Valero should have done better from Juan Cuadrado's cut back, but his shot was off target.

In the second half, Cerci once again forced Neto into making another save after being played in by Paulo Barreto, but the former Bari striker should have given the ball to an unmarked Alexander Farnerud who was on his left and in a better position.

Toro were looking extremely lively on the counter attack, and could have scored a late winner when the excellent Cerci crossed for Riccardo Meggiorini, but the substitute could only balloon his effort over the bar.

The game finished in stalemate and that was a fair result as neither side really did enough to win it, but in fairness it was also one of the better goalless games you will see this season. Torino extended their unbeaten home run to six games, and have still only lost once at home (to J**e) all season.