After reading about the most successful team in Torino's history 'il Grande Torino' during my recent trip to Turin I learnt more about the tactic that Toro employed during this period.

The 'W-M' formation which was used by the Granata is perhaps best explained by other tactical experts rather than myself, so this article will hopefully add a little bit more information. This got me to thinking whether this would ever be able to work during the modern era, and with no actual offers to manage a football club ever likely to come my way, I thought of the next best thing - Football Manager 2014.

Now, I should firstly admit that despite being a huge fan of this game, I am absolutely terrible at it - and whilst I can enjoy some success on the shortened iPad version of the game, I have actually managed to get Torino relegated on the current PC version (using a traditional tactic).

As you can see below, this is the tactic that I will be using in an attempt to replicate Torino's past glories, and whilst Nicola Bellomo is certainly no Valentino Mazzola this tactic will hopefully be good enough to keep me from relegating Toro for a second time. 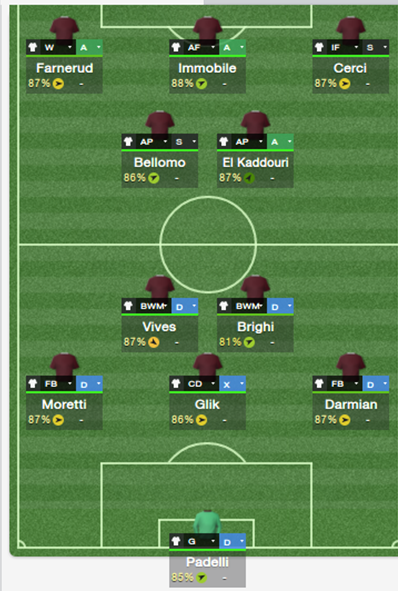 I have set myself two rules in this challenge, firstly that I can't change the formation all season - although I can change aspects of the roles of the players - e.g Matteo Brighi can change from being a ball winning midfielder  to deep lying playmaker if necessary. Secondly, I am not allowed anybody to sign anybody until the January transfer window, in an attempt to avoid making wholesale changes to the current Toro squad - the lack of options on both wings could make this more difficult than I anticipate.

The next update will feature reports on how I fared in my pre season games, and hopefully the results will not be too humiliating.