I have an admission to make - this challenge is much more difficult than I expected it to be. I am not sure whether this is an illustration of how impractical the W-M tactic is on a computer game, or just showing how bad I am at this game - possibly a bit a both.

The pre-season campaign had mixed results, as heavy defeats against Benfica and Villarreal were combined with convincing victories over lower league Dutch opposition.

However, the worst was yet to come, as a humiliating 6-1 home defeat in the Coppa Italia followed, despite having 60% of the possession. 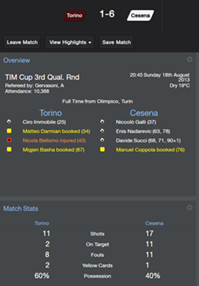 And despite a bright start in the opening league game of the season, with Omar El Kaddouri's 90th minute equaliser rescuing a point for the virtual Toro. However, a run of five consecutive defeats and 19 goals conceded has left Toro routed to the bottom of the table.

Hopefully things will take a change for the better in the next few games, but at this rate it is looking unlikely that this challenge will even last until January.
Posted by Torino Blogger at 20:24