On the 65th anniversary of the Superga air disaster, Torino will be hoping to pay a fitting tribute to 'Il Grande Torino' with a victory against Chievo on Sunday afternoon.

The Torino hierarchy did ask for this game to be moved so that the team did not have to play on the anniversary of the tragedy, but the Lega Calcio refused this request due to the fact Chievo are embroiled in a relegation battle, and their game has to kick off at the same time as the other relegation strugglers.

However, Urbano Cairo has chartered a private jet to allow the players to take part in the memorial service at Superga later that evening. Captain Kamil Glik will also pay his own personal tribute to those who died in the tragic plane crash, with a personalised captain's armband that features the following quote from Italian journalist Indro Montanelli :

"The heroes are always immortals in the eyes of those who believe in them. And so the kids will believe that Torino has not died: it is just away" 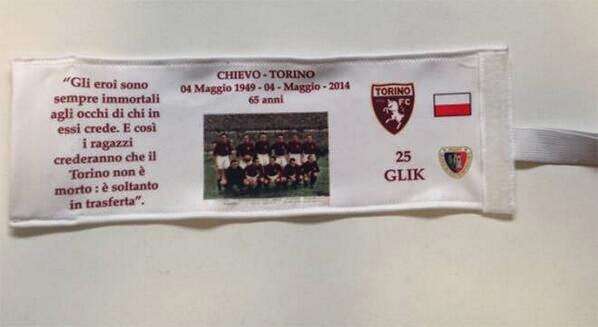 The Granata are in excellent form having won four of their last five games, and it is this form that means they currently occupy the final Europa League position. Toro have no injury worries, as both Giuseppe Vives and Cesare Bovo have recovered from slight injuries, therefore Giampiero Ventura is expected to name an unchanged side from the team that beat Udinese last weekend.

By contrast, opponents Chievo are in miserable form having lost four of their last five games, and have not beaten a side in the top half of the table since November.