Torino face their first European fixture in over 20 years when they face Brommapojkarna in Stockholm this evening.

The Granata are without Alessio Cerci and Matteo Darmian who are still lacking fitness after featuring in the World Cup. New signing Fabio Quagliarella also hasn't made the journey to Sweden, but should hopefully feature for his 'second' debut in the 2nd Leg next Thursday.

Cristian Molinaro, Antonio Nocerino and Josef Martinez should all make their competitive debuts for the Granata after signing in the summer. Swedish side Brommapojkarna are currently mid-way through their league season but are currently bottom of the table with only one victory all season.

With there being so many Torino fans from all across the globe who visit this website or contact me on Twitter, I thought it would be a good idea to learn more about each fan, and how they came about supporting Toro.

I've decided to start this feature with 'My Toro Story' but the idea is to make this a regular feature throughout the new season, so please email me at torinoblogger@hotmail.co.uk with your answers to the below questions and you too can be featured on the blog. 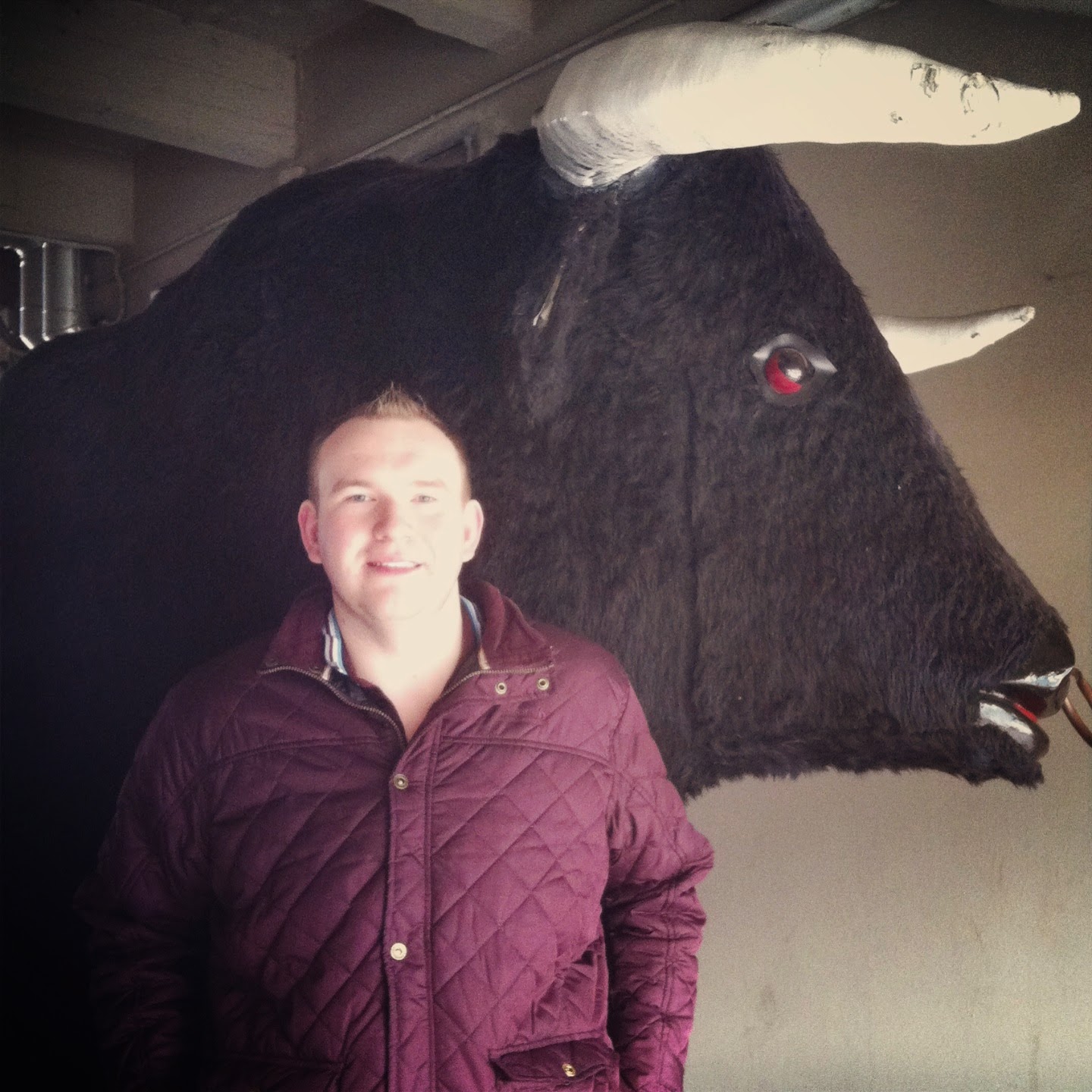 How and when did you start supporting Torino : I fell in love with the club after reading about its tragic history in a copy of ‘FourFourTwo’ magazine whilst on a family holiday to Milan in 2005. Having been a big fan of Italian football since the days it was presented by the magnificent James Richardson on Channel 4 in England, it was only natural that I would go and see some live Calcio whilst in Italy, and I was luckily enough to visit the San Siro to see both Milan (v Palermo) and Inter (v Roma) play. The passionate atmosphere that I witnessed at both of these matches increased my interest in Italian football, and therefore I decided it was essential to find an Italian club that I could support. Both Milan clubs were immediately eliminated, as despite enjoying my experiences at the San Siro, I didn’t want to be accused of being a glory supporter by choosing one of the established giants of the Italian game. And then, as if by chance, I read about Torino – once the greatest force in Italian football before being beset by the tragedy of Superga. My mind was made up; Torino would be my Italian team. The fact that in 2005 they were plying their trade in Serie B didn’t deter me (My English team Southampton had also recently been relegated to the second tier), and something that I did not know at the time, but obviously know now, is that Torino won their last scudetto in 1976, the same year that Southampton won their only major trophy, The FA Cup. Maybe it is a coincidence, but I like to think that it was my destiny to become a Torino fan, no matter how corny that sounds.

First Memories : I can remember watching my first Torino game on television in May 2006, as the Serie B playoffs were being broadcast on Eurosport in the UK. I was still in my early stages of being a Torino fan, so didn't really know much about the players, but can remember the commentators being confused about how the playoff system worked in Italy, and did not realise that the final against Mantova would go to extra time.

First Match Attended : My first Torino game was in October 2006, but unfortunately it didn't go so well as the Granata lost 1-0 to Fiorentina after an early Martin Jorgensen goal.

Favourite Former Players : I only like to judge players who I have seen play, therefore these are both players from the last decade. My first Toro hero was Alessandro Rosina who the team was built around after initially gaining promotion from Serie B. Those who know me also know that I have a somewhat unhealthy obsession with Rolando Bianchi, and I was lucky enough to meet him when his current club Bologna played in England last year.

Favourite Torino Goal : Alessandro Rosina v Lazio. I'm slightly biased when judging this goal as I was able to witness this goal live in the stadium and literally couldn't believe what I had just seen.

Predictions/Hopes for this Season : It will be difficult to replicate the sensational campaign of last year, especially with the departure of Ciro Immobile but another top half finish is certainly a realistic aim. A decent run in the Coppa Italia along with reaching the Group Stage of the Europa League (where we will hopefully face an English side) would represent a successful season in my opinion.
Posted by Torino Blogger at 16:50 2 comments:

Email ThisBlogThis!Share to TwitterShare to FacebookShare to Pinterest
Labels: My Toro Story

Going to a Match

If you are ever in Turin and fancy going to watch a game, you can find all the details that you will need below.

Stadium
Torino play their home games at the Stadio Olimpico, that was newly renovated in 2006 for the Winter Olympics in the city. From Porta Nuova train station you reach the stadium via the #4 tram until Filadelfia, or from Porta Susa station catch the #10 tram until Sebastopoli.

Tickets
Despite having a relatively modest capacity of 27,958, the Granata rarely sell out for home games, so their should be no problem in getting a ticket. The best atmosphere in the stadium is in the Curva Maratona which is where you will find the most passionate Torino fans. There are a number of places where you can purchase tickets around the city, but for convenience I usually buy my ticket at the stadium box office a couple of days before the match. Remember to take your passport when purchasing tickets and also when going to the game.

If you ever have any more questions, please don't hesitate contacting me either via the website or on Twitter (@TorinoBlogger).
Posted by Torino Blogger at 16:01 5 comments:

Torino will kick off their Europa League campaign with a two legged tie against Swedish side Brommapojkarna starting with the away leg on the 31st July.

As expected, the side who ply their trade in the top tier of Swedish football prevailed against Northern Irish side Crusaders after a 1-1 draw on Thursday.

The Granata will be hoping for a favourable result in the first leg, ahead of the return fixture in Turin on August 7th.

Forza Toro
Posted by Torino Blogger at 15:35 No comments:

Torino will face either IF Brommapojkarna from Sweden or Crusaders FC from Northern Ireland in the Europa League third qualifying round.

With Brommapojkarna 4-0 up following the first leg of their tie with Crusaders on Thursday, it is almost certain that the Granata will be facing the Swedish side in their first taste of European football in nearly twenty years.

The Stockholm-based side only qualified for the Europa League via the fair play league, as they only finished 13th in their domestic league last season. This season, they are currently bottom of the Swedish Allsvenskan having only won once in fourteen matches - although as they are in the middle of their domestic season, they may be fitter than their Italian rivals who have yet to complete their pre-season fixtures.

Torino will know their opponents for certain on the 24th July, and will then play the two legs of this tie on the following two Thursdays - the 31st July and 7th August.

Torino have completed the signing of Fabio Quagliarella from rivals Juventus for a fee in the region of €3 million euros - nine years after the leaving the club after bankruptcy.

Quagliarella scored seven times in thirty-eight appearances in his first spell with the Granata, the team he started his career with. Since leaving, Quagliarella has become one the best Italian strikers of his generation, with a reputation of scoring spectacular goals during his spells at Sampdoria, Udinese, Napoli and Juventus.

The Italian international has won twenty-five caps for his country, with the highlight undoubtedly being this spectacular goal in the 2010 World Cup against Slovakia.

Welcome Back to Torino Fabio! 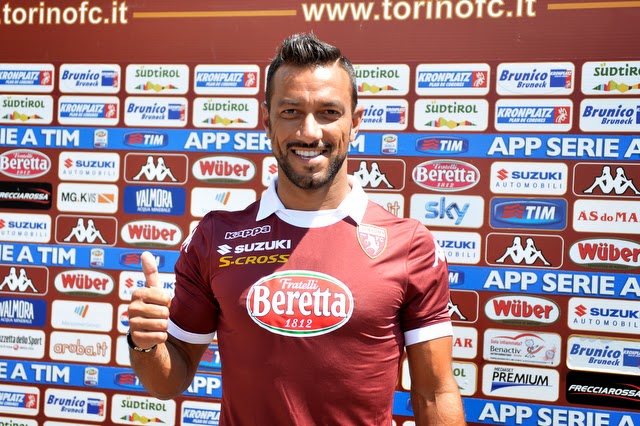 Torino added another reinforcment ahead of the new season by completing the signing of Antonio Nocerino on loan from AC Milan this evening.

Former Italy international Nocerino spent part of last season on loan at Premier League side West Ham United and can also count Juventus and Palermo amongst his former clubs.

Nocerino (whose wife is a Torino supporter) had been a main transfer target for the Granata this summer, but it was believed his high salary could scupper any deal. However, it is believed that AC Milan will now contribute to Nocerino's wages and that meant the deal accelerated quickly on Tuesday evening.

Ahead of their Europa League campaign which will start at the end of July, the Torino players arrived back for pre-season training yesterday.

In addition to Josef Martinez, Pontus Jansson and Cristian Molinaro who all confirmed signing for the Granata earlier this month, Toro have today announced two further additions.

Omar El Kaddouri has returned to the club following a successful loan spell last season, whilst Inter midfielder Marco Benassi (who was with Livorno last season) has signed on a co-ownership deal.

Whilst not yet official, Torino are also expected to completed moves for Brazilian defender Bruno Peres, Argentine Juan Sanchez Mino and Spanish midfielder Ruben Perez in the coming weeks.

Forza Toro
Posted by Torino Blogger at 20:35 No comments: