After two successive defeats, Torino will look to end the season on a high when they travel to Udine on Saturday evening.

Toro will be without Joel Obi who was injured in the warm up last weekend against Sassuolo, whilst Maxi Lopez could be available to start after featuring in the closing stages of that match.

The home side probably need one more win to guarantee their Serie A status, and have been impressive at home recently - beating Napoli and Fiorentina in the past month.

Prediction
Udinese 1-1 Torino
Posted by Torino Blogger at 14:45 No comments:

The party atmosphere at the newly renamed Stadio Olimpico Grande Torino was ruined by visitors Sassuolo who ran out 3-1 winners on Sunday afternoon.

Joel Obi, who was so impressive in the narrow defeat at Roma, was injured in the warm up so Afriyie Acquah started in his place.

The away side took the lead with only two minutes on the clock when Alfred Duncan's cross was headed home by Nicola Sansone.

However, Toro were level just five minutes later after a swift counter attack that was started by Daniele Baselli, and finished by Bruno Peres - who has now scored in consecutive home games.

Torino should have gone into the break in the lead, but Josef Martinez hit the bar when one on one with Andrea Consigli.

Andrea Belotti had Toro's best chance of the second half, but he blazed over the bar after good work from his strike partner Martinez.

And the Granata were made to pay for that miss when Domenico Berardi's corner was headed home by former Juve defender Federico Peluso with fifteen minutes remaining.

Sassuolo made the scoreline even more convincing with the last kick of the game, as former Fulham striker Marcello Trotta broke clear before finishing past Daniele Padelli.

Forza Toro
Posted by Torino Blogger at 20:14 No comments:

Torino will look to rebound after their late defeat against Roma when they face Sassuolo at the newly renamed Stadio Olimpico Grande Torino on Sunday afternoon.

After an online petition by Toro supporters, the local council have agreed to honour Torino's greatest ever team by renaming the stadium after the side who tragically died in the Superga air crash.

Toro will be without the injured Nikola Maksimovic so Cesare Bovo should return, whilst youngster Simone Edera keeps his place in the squad.

Sassuolo are currently in 7th place and have enjoyed another good season under coach Eusebio Di Francesco, but have only won one of their last six matches.

Prediction
Torino 1-1 Sassuolo
Posted by Torino Blogger at 12:27 No comments:

Torino slipped to a 3-2 defeat against Roma on Wednesday evening, as the home side were thankful for a memorable contribution from captain Francesco Totti.

Nikola Maksimovic, Gaston Silva and Alessandro Gazzi all came into the side, whilst Andrea Belotti continued to partner Josef Martinez up front.

It was the Venezuelan striker Martinez who had the first chance of the game, as he received Bruno Peres' pass on his chest, flicked the ball past Kostas Manolas, but then blazed his volley high over the bar.

Toro were continuing to create chances, and this time it was the inform Andrea Belotti whose long range shot hit the post.

Ten minutes before the break, Torino were awarded a penalty when Kostas Manolas was penalised for pulling back Belotti in the area. The former Palermo man sent Wojciech Szczesny the wrong way to give Toro a deserved half time lead.

With twenty-five minutes remaining, Kostas Manolas made amends for his earlier error by heading home Diego Perotti's corner to equalise.

However, with ten minutes remaining a well worked move by the Granata culminated in Josef Martinez tapping home Bruno Peres' cross - and the former Young Boys striker finally scored his first goal of this season.

The home side needed divine intervention, and with five minutes remaining Luciano Spalletti bought on Roma captain Francesco Totti, in what could be his final season with the club.

Within twenty-two seconds Roma got the intervention they were looking for, as Totti got the final touch on a Miralem Pjanic free kick to equalise.

With the Stadio Olimpico now rocking, the home side side were awarded a controversial penalty moments later, as Nikola Maksimovic was adjudged to have handled Perotti's cross.

Francesco Totti stepped up to take the penalty, which narrowly beat Daniele Padelli but remarkably the Roma captain had now had two touches and scored two goals.

Giampiero Ventura threw on Primavera product Simone Edera in the dying seconds in search of an equaliser, but it was not to be. Despite an impressive performance, Toro fell to defeat on a night that belonged to one man - Francesco Totti.

Forza Toro
Posted by Torino Blogger at 21:45 No comments:

After three successive wins, Torino will travel to Rome on Wednesday evening with renewed confidence.

With Maxi Lopez still out with a fever, Giampiero Ventura has called up strikers Simone Edera and Leonardo Candellone from the Primavera side to act as cover for Andrea Belotti and Josef Martinez.

Edera has scored eleven goals in twenty-eight games at youth level this season, whilst Candellone has twelve goals in thirty-two matches.

Roma are currently on a twelve match unbeaten run, but have drawn their last two matches which may give the Granata hope of causing an upset.

Prediction
Roma 2-0 Torino
Posted by Torino Blogger at 19:54 No comments:

Andrea Belotti's stoppage time penalty was enough for Torino to claim all three points at the Stadio Renato Dell'Ara on Saturday afternoon.

Maxi Lopez was not available, so Belotti was partnered in attack by Josef Martinez, whilst Joel Obi retained his place in midfield.

It was Martinez who had Toro's first chance of the game, but his low shot from outside the area was well saved by Antonio Mirante.

Chances were few and far between in the Bologna sun, but mid-way through the second half, former Juve man Emanuele Giaccherini saw his shot hit the base of the post and roll clear of danger.

In injury time, Josef Martinez came close to scoring his long-awaited first goal of the season, but the Venezuelan's shot went wide of the far post.

However, the drama was still to come as in the third minute of injury time, Andrea Belotti was tripped in the area by Luca Rossettini and the referee awarded a penalty.

Belotti stepped up to take the penalty himself, and he sent Mirante the wrong way to give Toro all three points.

Forza Toro
Posted by Torino Blogger at 20:40 No comments:

Torino will look to win three successive league games for the first time this season when they face Bologna at the Stadio Renato Dall'Ara on Saturday evening.

Andrea Belotti is expected to be rested so Josef Martinez could get a rare start, whilst Afriyie Acquah's injury could allow Marco Benassi and Daniele Baselli to both start.

Bologna ended their run of three successive defeats with a surprise draw against Roma at the Stadio Olimpico on Monday, but the Rossoblu have not won in seven games.

Torino clinched their first home win since January after a hard-fought 2-1 victory over Atalanta on Sunday afternoon.

Captain Kamil Glik returned to the starting eleven following suspension, whilst Joel Obi was surprisingly preferred to both Marco Benassi and Daniele Baselli in midfield.

Atalanta made the better start and Boukary Drame and Mauricio Pinilla both had great chances for the away side to take the lead.

However, ten minutes before half time, an exquisite Afriyie Acquah pass found Bruno Peres, and the Brazilian fired the ball into the top corner for his first goal of the season.

Less than a minute into the second half, Toro doubled their lead when an error from Atalanta defender Guglielmo Stendardo was capitalised on by Maxi Lopez who finished calmly.

With less than ten minutes remaining Luca Cigarini's free kick ensured a nervy ending for Toro, but the Granata held on to claim a second successive vctory.

Forza Toro
Posted by Torino Blogger at 21:46 No comments:

Torino will look to earn their first home victory since January when they face Atalanta on Sunday afternoon.

The Granata will be buoyed by their surprise victory over Inter last weekend, and will have captain Kamil Glik available after suspension.

Atalanta have won their last two games under former Toro coach Edy Reja, but have only won two away games all season - the last of which was a shock win against Roma in November.

Prediction
Torino 2-0 Atalanta
Posted by Torino Blogger at 20:20 No comments:

Torino finally end their long run without a victory thanks to an impressive 2-1 victory over nine men Inter on Sunday evening.

Inter were awarded a controversial penalty after only seventeen minutes when Marcelo Brozovic's shot hit the arm of Emiliano Moretti who had attempted to block the shot.

Mauro Icardi stepped up and his powerful effort beat Daniele Padelli from 12 yards to give the home side the lead.

Toro were level ten minutes into the 2nd half after excellent hold up play from Maxi Lopez allowed the Argentine to feed Cristian Molinaro who scored a rare goal with his right foot.

Moments after that goal Inter were reduced to ten men when defender Miranda was dismissed for a second yellow card. Despite that setback, Inter almost took the lead through Icardi's close range header, but he was denied by an excellent save from Padelli.

With less than twenty minutes remaining, Yuto Nagatomo was adjudged to have fouled Andrea Belotti in the area and as the Japanese international was the last man he was also given his marching orders.

Belotti stepped up and sent penalty saving expert Samir Handanovic the wrong way to give Toro the lead.

The Granata had more chances on the counter attack to extend their lead, with Daniele Baselli coming the closest but his effort hit the post late on. The score remained 2-1 as Toro claimed a much needed victory, and their second successive win against Inter at the San Siro.

Forza Toro
Posted by Torino Blogger at 20:39 No comments: 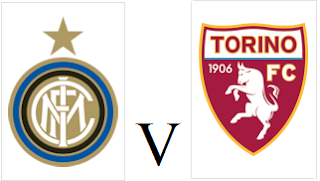 Torino will travel to the San Siro hoping for a repeat of last year's dramatic victory when Emiliano Moretti's scored in injury time.

With Toro just five points above the bottom three, the Granata need points quickly to ease any relegation fears. That task will be made more difficult by the fact that Kamil Glik is suspended whilst Afriyie Acquah and Ciro Immobile are both injured.

The home side are in good form and have won their last four league games at the San Siro and need points if they are to maintain their challenge for a top 3 finish.

Prediction
Inter 2-1 Torino
Posted by Torino Blogger at 16:24 No comments: