Torino have completed perhaps the most surprising signing of the summer transfer window by acquiring England goalkeeper Joe Hart on a season long loan from Manchester City.

Whilst rumours of a potential move circulated on the weekend, it seemed that Hart's wages would prove to be a major obstacle to any deal. However, Manchester City have agreed to pay the majority of his wages, thus clearing the way for Hart to move to the Granata.

The presence of Attilio Lombardo on the Toro coaching staff was believed to be a major factor in Hart deciding to move to Italy, as the former Crystal Palace player was previously on the coaching staff at Manchester City.

Hart will become the first Englishman to play for Torino since Tony Dorigo, and is in line to make his debut against Atalanta on September 11th. 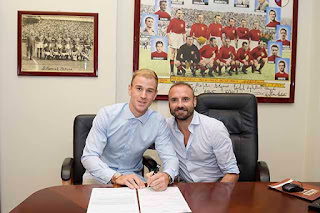 Toro had a busy deadline day, as the Granata also sealed the signing of Napoli midfielder Mirko Valdifiori on a permanent deal. The former Empoli man moved to Toro as part of the deal which saw Nikola Maksimovic complete his drawn out move to Napoli, the Serbian has initially joined on loan - although the Partenopei are obligated to make the move permanent at the end of the season.

There were also a number of outgoings as goalkeepers Salvador Ichazo and Alfred Gomis joined Bari and Bologna respectively, both on loan. Panagiotis Tachtsidis, who only joined Toro at the beginning of the month, has moved to Cagliari on loan.