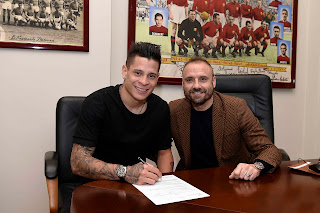 Torino have completed the loan signing of Paraguay international Juan Iturbe from Roma until the end of the season.

Iturbe has found opportunities limited at Roma this season, but Toro will be hoping the winger can replicate the form that made the Giallorossi pay Hellas Verona €22 million for his services back in 2014.

As part of this deal, Torino have completed the permanent signing of Spanish winger Iago Falque who initially joined the club on loan from Roma in the summer.

In other news, reliable defender Cesare Bovo has left the club to join Serie A strugglers Pescara on a permanent deal.