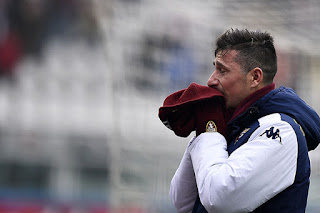 The overriding image from Sunday's 1-1 draw with Atalanta occurred after the final whistle, as veteran midfielder Giuseppe Vives said an emotional goodbye to the Granata fans ahead of his move to Pro Vercelli.

At 36 years old, Vives has experienced most things in his football career, but even the former Lecce man seemed a little overawed with his reception from the Curva Maratona.

This was a touching and genuine moment between a player and his supporters, which showed mutual gratitude and respect, something which is unfortunately lacking from the modern game. Vives was certainly not one of the most gifted players to pull on the Torino shirt, but he exemplified the Granata spirit and gave absolute everything in each of his 164 appearances for the club.

After arriving in July 2011, Vives helped the club win promotion to Serie A in his first season, and his departure now means that every player from that promotion winning squad has now left the club.

Vives' versatility and reliability was an invaluable asset for the Granata in their return to Serie A, and this was perhaps best demonstrated by the fact that he played as a libero in a back three in the crucial fixture against Fiorentina in the 2013/14 season.

Torino's seventh placed finish in that campaign meant that Vives would get to play European football for the first time in his career, and he continued to perform admirably and he played the whole match as Toro recorded a historic victory against Athletic Bilbao in the last 32 of the Europa League.

The midfielder also chipped in with five goals throughout his Toro career, the best of which this incredible 'billiard shot' effort against Bologna last season, in a game perhaps better remembered for Andrea Belotti scoring his first goal for the club.

After the arrival of Mirko Valdifiori this season, Vives found first team opportunities limited, and it was mutually agreed to allow him to leave the club to continue his career.

Thanks for the memories Giuseppe and bocca al lupo!
Posted by Torino Blogger at 21:43