After four successive defeats, Torino travel to Sardinia to face Cagliari desperately in need of a victory.

Walter Mazzarri is expected to change to a 3-5-2 formation to improve the Granata's fortunes, whilst Daniele Baselli should return to the starting eleven following illness.

Cagliari are safely in mid table and should have no worries about a relegation battle, despite having only won one of their last five Serie A games, which was a fortnight ago against Benevento.

Prediction
Cagliari 1-1 Torino
Posted by Torino Blogger at 22:25 No comments:

The atmosphere in the Stadio Grande Torino on Sunday afternoon was a strange one, even before the match with Fiorentina kicked off.

The fixture against Fiorentina is usually a surreal match, and has been described as a 'festival of friendship' due to the gemellaggio (twinning) between the two sets of supporters due to their mutual dislike of Juventus, never has the saying 'the enemy of my enemy is my friend' been more apt.

However, the atmosphere on Sunday was different. This was in part due to the tragic death of Fiorentina captain Davide Astori two weeks ago, which meant that there was a sombre mood around the stadium, and Torino ultras paraded a 'ciao Davide' banner before kick off  that was well received by the travelling Fiorentina supporters. 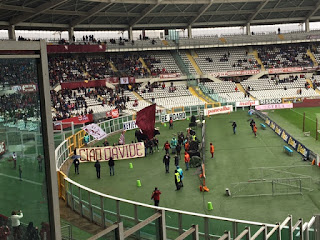 There was also seeds of discontent amongst the home supporters who were unhappy at how their season has derailed in recent weeks. After a promising start to Walter Mazzarri's reign as Toro coach, where the Granata picked up an impressive eleven points out of a possible fifteen the Granata had lost three consecutive games prior to this match.

Mazzarri's unbeaten record as Toro coach ended with a 1-0 home defeat to Juventus in mid-February, and despite their impressive form, the timid performance of Torino in that match was heavily criticised. Former Torino striker Marco Ferrante questioned the teams 'courage' as the players almost seemed content with a narrow defeat in a match that is, for the supporters at least, the most important of the season.

Defeats against Hellas Verona and Roma followed and the Torino supporters unveiled a number of banners criticising both the players and club ahead of the Fiorentina match.

'You only think about money and on the pitch you don't fight anymore' one of the banners read and the team were greeted onto the pitch with whistles and jeers at the beginning of the second half after a disappointing first half performance.

Sometimes it takes an outsider's view to gain some perspective on a situation, and I attended Sunday's match with my girlfriend, who despite disliking football, reluctantly agreed to attend her first ever live match. Upon hearing the jeers of the Maratona she rhetorically asked 'well that's not going to help the players is it?'

Whilst I was in total agreement with her, I could also understand the frustrations of the Toro supporters who had decided to protest. Toro currently find themselves in Serie A purgatory, where they are not good enough to qualify for Europe but are also too good to find themselves in a relegation battle, so they find themselves in mid-table, with little to aim for.

Supporters would probably accept mid-table mediocrity as long as it was combined with entertaining football, young talents being given opportunities and the odd impressive victory over top six opponents, however, Toro have not been able to provide this either. Talented youngsters such as Kevin Bonifazi, Antonio Barreca and Simone Edera are having their progress stifled by more experienced players who continue to under perform. In addition, Toro have also only beaten one top ten opponent all season, and that was a Lazio team who had Ciro Immobile harshly sent off before half time.

Whilst teams with similar wage budgets such as Atalanta and Sampdoria are troubling the established elite, Toro are left wondering what might have been. When Sinisa Mihajlovic was sacked in January and replaced by Walter Mazzarri, this was seen as a move to try and re-energise the clubs target of European football. However, Torino did not reinforce their squad at all in the January transfer window, despite there being obvious areas in which improvement was needed.

It is fair to say that luck has also not been on Toro's side this season, captain Andrea Belotti has struggled to replicate last season's excellent form and has suffered with a number of injuries. As has promising Brazilian defender Lyanco who has rarely been able to partner the outstanding Nicolas N'Koulou in the heart of the Toro defence. Speaking of whom, the Cameroon international has been a rare positive in this disappointing campaign, and sporting director Gianluca Petrachi must prioritise retaining his services on a permanent basis in the summer.

After another disappointing performance on Sunday, Toro fell to a fourth consecutive defeat to all but end their chances of European qualification, and if performances do not improve, the protests may not end there.

Forza Toro
Posted by Torino Blogger at 20:02 No comments:

Email ThisBlogThis!Share to TwitterShare to FacebookShare to Pinterest
Labels: Season 17/18

Torino produced their worst performance of the season as they fell to a fourth consecutive defeat at home to Fiorentina.

Walter Mazzarri made one change from the team who were beaten at Roma as Mirko Valdifiori replaced Daniele Baselli who missed out with flu.

It was a chaotic opening few minutes, as Fiorentina were awarded a penalty when Giovanni Simeone went down in the area under a challenge from Emiliano Moretti, however this decision was reversed after consulting VAR.

However, moments later, Fiorentina were awarded a penalty, as Lorenzo De Silvestri handled Cristiano Biraghi's shot. Despite initially being turned down by referee Claudio Gavillucci, the Viola's appeal went to VAR and they were eventually awarded a penalty. However, Salvatore Sirigu saved Jordan Veretout's weak effort.

Toro were struggling to get going and create chances, although Nicolas N'Koulou did have a half chance from a corner.

Fiorentina took the lead on the hour mark as Afriyie Acquah lost the ball in his own half and Jordan Veretout atoned for his earlier penalty miss by curling the ball past Sirigu. Adem Ljajic came on to make a rare appearance as a substitute to try and create an equalise, and the Serbian did just that.

However, the drama did not end there, and in injury time, another handball decision went to VAR after initially being turned down by Gavillucci who was having a miserable afternoon. VAR adjudged that Cristian Ansaldi did handle Biraghi's cross and Fiorentina were awarded their second penalty of the game.

Substitute Cyril Thereau made no mistake and converted the spot kick to earn Fiorentina all three points and to finally end Toro's hopes of European qualification, with the Granata now eight points away from 7th place with only ten games remaining.

Forza Toro
Posted by Torino Blogger at 12:49 No comments:

Torino will try and end a run of three successive defeats when they face Fiorentina on Sunday afternoon.

Toro had an improved performance in their last match against Roma, particularly in the first half, but were disappointing after conceding the first goal.

M'Baye Niang could return to the starting eleven, whilst Nicolas Burdisso has returned from suspension.

This fixture is bound to be an emotional affair, following the tragic death of Fiorentina captain Davide Astori only two weeks ago. Fiorentina come into this match in good form, having won three of their last five games, including a narrow 1-0 victory over Benevento last weekend.

Torino lost a third successive game as they fell to a 3-0 defeat against Champions League contenders Roma on Friday night.

Alex Berenguer and Daniele Baselli both came into the starting eleven, in place of M'Baye Niang and Joel Obi.

Toro were the better side in the first half, and Roma keeper Alisson had to make a great save to tip Iago Falque's low shot round the post. Falque then turned provided as his excellent cross found Andrea Belotti, he somehow blazed the ball over the bar.

The Granata were continuing to create chances, as they recovered the ball inside the Roma half and Afriyie Acquah forced another save out of Alisson.

Roma took the lead ten minutes into the second half as Kostas Manolas headed home Alessandro Florenzi's excellent cross. Toro struggled to react after going a goal behind, and with less than twenty minutes remaining, Roma doubled their lead as Daniele De Rossi reacted quickest as Toro failed to clear a free kick.

In injury time, Roma added a third goal through substitute Lorenzo Pellegrini which was harsh on Toro, especially considering their promising first half performance.

Torino will look to win at the Stadio Olimpico for the third time this season as they face Roma on Friday evening.

Toro have already knocked Roma out of the Coppa Italia, whilst they also shocked city rivals Lazio 3-1 in the same stadium after Ciro Immobile received a first half red card.

The Granata have not played for a fortnight after their home match against Crotone was postponed following the tragic death of Fiorentina captain Davide Astori.

Roma come into this match in good form,  after beating league leaders Napoli 4-2 at the San Paolo last Saturday - although Edin Dzeko is suspended for this game.

Prediction
Roma 2-2 Torino
Posted by Torino Blogger at 17:53 No comments:

Torino fell to a second successive defeat as they lost to relegation threatened Hellas Verona on Sunday afternoon.

M'Baye Niang returned to the starting eleven, whilst Afriyie Acquah was preferred to Daniele Baselli in midfield.

Toro made a poor start and were behind after only twelve minutes as Mattia Valoti headed home from a corner. The Granata failed to have a shot on target in the first half, with only Niang and captain Andrea Belotti even having half chances.

Toro were level four minutes into the second half as a rapid counter attack involving the front three culminated in Niang firing past Nicolas in the Hellas Verona goal.

Nicolas N'Koulou had a great chance to give Toro the lead, but the defender blazed the ball over the bar when well placed. Somewhat against the run of play, Hellas took the lead with thirteen minutes left, as Mattia Valoti scored his second of the game, reacting quickest after Salvatore Sirigu parried Bruno Petkovic's initial effort.

Toro could not find a equaliser so fell to a second successive defeat, and with Sampdoria and AC Milan both winning, the Granata are now eight points away from the Europa League places.